A Breath of Eyre by Eve Marie Mont 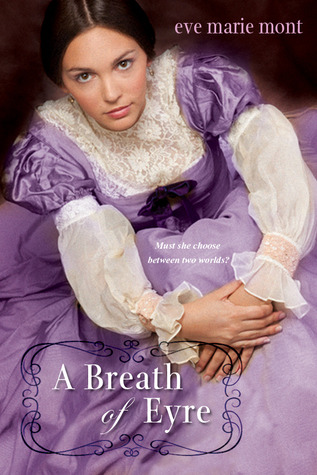 Purchase a copy at Amazon

Emma Townsend has always believed in stories—the ones she reads voraciously, and the ones she creates in her head. Perhaps it’s because she feels like an outsider at her exclusive prep school, or because her stepmother doesn’t come close to filling the void left by her mother’s death. And her only romantic prospect—apart from a crush on her English teacher—is Gray Newman, a long-time friend who just adds to Emma’s confusion. But escape soon arrives in an old leather-bound copy of Jane Eyre…

Reading of Jane’s isolation sparks a deep sense of kinship. Then fate takes things a leap further when a lightning storm catapults Emma right into Jane’s body and her nineteenth-century world. As governess at Thornfield, Emma has a sense of belonging she’s never known—and an attraction to the brooding Mr. Rochester. Now, moving between her two realities and uncovering secrets in both, Emma must decide whether her destiny lies in the pages of Jane’s story, or in the unwritten chapters of her own…

I was pleasantly surprised by this book. I had never read the story of Jane Eyre and had no idea of what it was all about.

Emma is a young writer. She loves writing poetry and making up her own stories. The book starts off at Emma’s sixteenth birthday party. She does not really even want to be there and worst of all, her parent’s had invited Gray. Gray and Emma grew up together. Their mother’s were best friends. They sort of have a love-hate relationship.

As Emma struggles through her year, she is jostled back and forth between being Jane and Emma. She finds out a lot of secrets and a lot about herself along the way.

Emma was a great heroine. She was strong and at times could be feisty, but my favorite is definitely Gray. He is your typical masked adolescent that does a good job at looking fine on the outside, but tormented on the inside. Those last few chapters with him were excruciatingly painful. It was hard to see a character so full of life at the beginning hit a downward spiral so quickly.

I enjoyed Ms. Mont’s writing style. She had a great way of explaining without going over the top with details.

The ending was superb, I got the butterflies just reading the last chapter. I expect the next book in the series, A Touch of Scarlet, to be just as wonderful.

1. Your demographics? Name, age, where you live?

I’m Gray Newman, eighteen years old, a senior at Braeburn Academy, this hippie school my parents sent me to. We have harmonic huddles every week where we have to sit around and bare our feelings over drum beats. It’s torture. I try to act mysterious and disturbed so I don’t have to talk. Personally, I prefer swimming—head under water, no talking, no thinking. My parents live in Waltham, MA about twenty minutes from Boston in a big stone house with lots of windows. It’s beautiful, but it makes me feel exposed. I spend a lot of time in my room, which is built into the round turret of the house. It’s got a balcony and everything.

2. What do you believe is a person’s first impression of you?

I like to think that people see me as a nice, friendly guy, but I probably come off as stand-offish. Someone once told me I stand like a Marine. I didn’t know how to take that. Was it a compliment? Or an insult, like he was saying I had a stick up my ass? Very few people understand me so I’ve kind of stopped caring what people think. Well, except one person.

3. Do you have a girlfriend? A crush?

Um, yeah, I do. A crush, that is. This girl can see right through me, but she can’t see herself, how amazing she is. She doesn’t get why I like her so she can’t believe that I do.

4. Your best friend’s name and how long you have known each other.

My best friend was Dan Brockman, but something happened between us, and I had to transfer schools, and now we don’t talk. I don’t know what would happen if we ran into each other. I hope it never happens.

Thanks to Ms. Mont for taking the time to introduce us to Gray and thanks to Kensington Publishing for the ARC for this review!

Follow Eve Marie Mont at one of the following links: