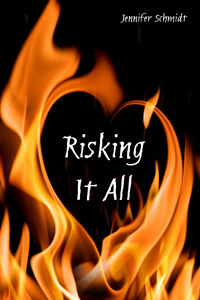 Risking It All by Jennifer Schmidt

Kennedy Monroe barely got her foot in her college dorm her freshman year before she was being warned about a certain dark-haired, blue-eyed self-proclaimed Casanova. There were only so many tales of heartache – and incredibly steamy nights – she could listen to before she started to believe them. But after a run in with the most sought after college womanizer, her ill feelings toward him change and soon a friendship forms that surprises everyone.

Twelve years later Kennedy and Memphis Adams are closer than ever – and only friends despite what those around them think, including Kennedy’s boyfriend Ian Brooks. When Kennedy accepts an invitation to vacation in Alaska from Memphis, her relationship with Brooks is tested as is her restraint when it comes to the desire she has always had for her best friend.

Alone with Memphis in Alaska, Kennedy finds it increasingly harder to ignore temptation and wants nothing more than to give into her secret desires with the one man that has always been off limits. But is one night of passion worth the possible risk of losing their friendship over?

Feeling torn between doing the right thing and doing what she wants, Kennedy fears losing her best friend. She knows she needs to sort out her feelings for the two men in her life and deal with the consequences of her actions, but how can she when everything seems to be falling apart so fast? And how much can Memphis take before he’s pushed too far and can no longer take Kennedy’s inability to make a decision about what and who she wants?

Kennedy discovers the harsh reality of how one night can change everything and leave her risking it all.

I really, really enjoyed this book! When I had first started it, the book had kind of reminded me of Beautiful Disaster. We all know that BD is one of my all time favorites, especially since NightlyReading is quoted on the back cover of the paperback. But, enough about that…on with the review…

I am going to cut right to the chase…Memphis… can I say la swoon? Memphis definitely has the bad boy exterior with the leather jacket and riding the motorcycle. But, he is all teddy bear inside. Perfect book boyfriend material!

I loved Kennedy in the beginning, but by the end, I wanted to slap the crap out of her! WTH was she doing??? I understand that she was confused, but oohhh boy, she sure does get herself into a pickle!!!

I was not a fan of Brooks from the get go. He just seemed so boring compared to Memphis.

One thought that I did have while reading was that I wish that we had a little more background into the conquests of Memphis. We get told that he is a player, but, we do not really get any examples. What a great idea for a novella!

The ending was actually pretty perfect and I was thrilled! I can’t wait to read more by this author:)

Ian Brooks is a secondary character in Risking It All, yet he’s needed to make the story what it is. Even though his part isn’t very big, the book wouldn’t have had the angst that it did without him involved.

I never really put that much thought into the character of Brooks. I just needed someone to play the inconsiderate, workaholic boyfriend. I didn’t have a backstory for him, I didn’t know what drove him to be the work obsessed guy he was or why he chose the career he did. The only thing I did know was he had to be successful, older and charming enough to win Kennedy at first but distracted enough by his career to make her feel insignificant.

He isn’t the core of the story, but Brooks is important to an extent, and is one of those minor characters that I would have liked to explore more. Did he come from a well off family? Maybe from a long line of surgeons and it was just expected of him to fall into the family tradition and succeed. Could he have been pressured by his father (or mother) to be the best that he could be—as good as all the other doctors in the family?

Or was he was so absorbed with his career because it was the only thing he had? Maybe his home life hadn’t been so great and by working hard and getting away from it all he had finally made something of himself and he was proud of where it had gotten him. Or he could have had the most awesome supportive parents who encouraged him to chase his dreams whatever they may be.

What about brothers or sisters? Friends? Ex-girlfriends? Experiences in his life that he never wanted to forget. And some that he wished he didn’t remember. All the things that give a person a past we don’t know about Brooks.

It’s his backstory that could have revealed so much about what made him tick and why he acted the way he did. Maybe if we knew about his past it and why he was such a selfish, inconsiderate ass, we would be more sympathetic toward him.

Or maybe not because no matter what his story is there’s no way he could live up to Memphis—at least in my eyes.