Published May 7, 2013 by Putnam Juvenile

Now, it’s the dawn of the 5th wave, and on a lonely stretch of highway, Cassie runs from Them. The beings who only look human, who roam the countryside killing anyone they see. Who have scattered Earth’s last survivors. To stay alone is to stay alive, Cassie believes, until she meets Evan Walker. Beguiling and mysterious, Evan Walker may be Cassie’s only hope for rescuing her brother—or even saving herself. But Cassie must choose: between trust and despair, between defiance and surrender, between life and death. To give up or to get up.

Holy alien babies! This book was just awesome. One that everyone will be fighting to get the sequel! I am willing to fight right now for it! I tend to read lots of books. *obviously* And sometimes you find yourself in a reading slump. This book will definitely pull you out of one of those!

Cassie is literally running for her life after the aliens had taken over earth. The take over came in waves. The first wave, they lost all electronic devices and electricity. Even cars wouldn’t start due to the computers. The second wave, I believe was a stunami that the aliens created and that wiped out a lot of people.  Then came the third and fourth waves but you get the picture. Now The 5th Wave is here and it is not really what Cassie had expected. She believes that she is the last living person on earth until she meets Evan. But, he is not exactly whom he seems either and Cassie has to learn to trust to survive!

I love the way this book is written. It is written in the present but we get flash backs of Cassie’s life and what had happened to the rest of her family. I have never read anything by Mr. Yancey before, but I can honestly say that I will in the future!

My favorite character would have to be Cassie. She is bad ass! She has one thought only and that is to save her brother! And she will do ANYTHING to do that! She is not even sure if he is still alive, but is willing to die to find out.

The ending was left on a small cliffhanger. According to Goodreads, this will be a trilogy with the next book coming out sometime in August 2014. UGH! that is over a year away!!!!

If you have not read this book yet, YOU NEED TO GO BUY IT! GO NOW! RIGHT NOW!!! 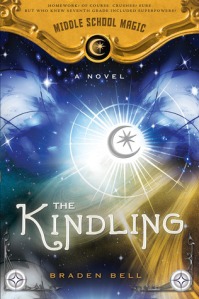 All thirteen-year-old Connor Dell wants to do is pass pre-algebra, play lacrosse, and possibly kiss Melanie Stephens, but when a run-in with the school bully ignites strange powers inside him, Connor’s normal teenage life goes up in flames. Now he’ll need his new powers to defeat the Darkness that’s coming for him. Fast-paced and original, this book’s guaranteed to keep you guessing!

Conner, Lexa, and Melanie are back! Just when they think life is normal again, a dangerous shadow creature begins to hunt them. The trio must develop their powers in order to conquer this new peril and protect their school. Filled with action and even more magic, this book continues the exciting adventure in the Middle School Magic series.

Braden Bell earned  a Ph.D. in educational theatre from New York University. He holds a B.A. and M.A. in theatre arts and child drama from Brigham Young University. He and his family live on a quiet, wooded lot in Tennessee, where he teaches theatre and music at a private middle school–the world described in The Kindling and Penumbras(whether his evenings and weekends are spent fighting evil is something he cannot disclose). An experienced performer, Braden enjoys singing, acting, reading, gardening, and long walks with the dog.