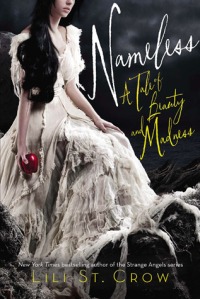 When Camille was six years old, she was discovered alone in the snow by Enrico Vultusino, godfather of the Seven—the powerful Families that rule magic-ridden New Haven. Papa Vultusino adopted the mute, scarred child, naming her after his dead wife and raising her in luxury on Haven Hill alongside his own son, Nico.

Now Cami is turning sixteen. She’s no longer mute, though she keeps her faded scars hidden under her school uniform, and though she opens up only to her two best friends, Ruby and Ellie, and to Nico, who has become more than a brother to her. But even though Cami is a pampered Vultusino heiress, she knows that she is not really Family. Unlike them, she is a mortal with a past that lies buried in trauma. And it’s not until she meets the mysterious Tor, who reveals scars of his own, that Cami begins to uncover the secrets of her birth…to find out where she comes from and why her past is threatening her now

Weird. That’s the word that completely encompasses the nature of this book; weird. It was so weird, everything about it was just so weird, but it was AMAZING!

I have been a fan of Lili St. Crow since I read her Strange Angels series. That was a really good series filled with a kick butt female lead and an interesting premise. So when I found out that Lili was writing another young adult series, I made my way to amazon and pre ordered the heck out of it! When the pretty little thing landed on my doorstep I was excited! I mean it’s written by one of my favorite authors and it’s a retelling of Snow White, those are factors that equal success in my book and believe me this was a success!

This book has tons of mixed reviews on goodreads. While a lot of people love it many more people hate it, which worried me enough that I put off reading it for awhile. I have to emphasize how weird this book is. The trilogy is called Tales of Beauty & Madness and there is a whole lot of madness! To anybody thinking about reading this book all I can say is PUSH THROUGH!! Don’t let the prologue scare you off! No matter of weird it seems, and if it does scare you off you might as well stop reading because it only gets weirder from there!

This book is so unique I’ve never seen a fairy tale retelling done quite like this! The world and the creatures where just so interesting, and I loved the fact that Lili never really explained the creatures. I enjoyed figuring them out for myself and realizing they are nothing that I haven’t already been exposed too in other books and movies. There is a lot of world building in this book. You learn learn a lot of history about the town, and creatures. So if you don’t like books that are set at a slower pace then this book is not for you. This book is pretty much set at a day-to-day pace. I personally loved the pacing, because I enjoyed learning more about the town &the characters.

Cami was an interesting character. I loved the fact that she was practically unpredictable, I could never guess what she was going to do next or what would she do in a situation. She is a very insecure and sheltered character, who really struggles in not knowing where she belongs and what she is. I loved that nothing could ever stop her from trying to found out. She’s determined, headstrong, and stubborn and those are qualities I truly admired about her. I also loved Nico. He was the misunderstood one  and most definitely the character I wanted to know more about.  The only thing I really knew about him was just how much he loved Cami. He was very wishy-washy to me. One moment he has this really sweet, cute moment with Cami and then the next day he’s gone or ignoring her,or yelling at her. Even though he mood swings were quite annoying I enjoyed watching how his and Cami’s relationship played out.

What makes this book even more special are the secondary characters! Ellie & Ruby are amazing! These two stand by Cami no matter what and they don’t let her hide from anything, they make her face her problems and fears by letting her know that she is not alone and never will be! Ruby is fierce and is like a mama bear always trying to protect the both Cami and Ellie. Ellie I really love her, she was the smart characters who can be scary when she wants too. Learning more about her and her home life was very interesting, even though she is this smart, strong character she is struggling with a lot of things in her life which make her friends want to protect and take care of her in any way possible.

I look forward to the rest of this triology especially the next book which  is a companion in Ellie’s POV and it’s the retelling of Cinderella!