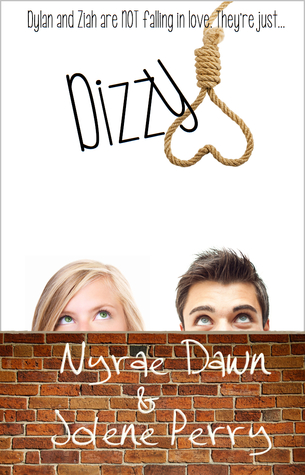 Dylan doesn’t do relationships. He and his older brother watched their dad go through hell and back, so they made a pact years ago—no girl would come between the Gibson boys. But his brother sells out. He’s getting married anyway. To the sister of a chick Dylan met at a party, who’s probably the angriest girl he’s ever met. Unfortunately, she happens to be hot, too.
Ziah’s life is upside down—her safe boyfriend turns out to be not-so-safe, and now her sister is getting married before college is over to the older brother of a spoiled, party boy who drives her crazy. And also makes her heart beat too fast.

There’s no denying the attraction, but there’s also no denying how much they irritate each other. When they’re thrown together as forced wedding planners, they find an ally in each other–neither wants this wedding to happen.

But instead of putting a stop to the crazy nuptials they find themselves at fittings and cake testing. And maybe even…a few dates?
Dizzy is a novel about what happens when two people who are determined not to fall in love, maybe do anyway. Maybe.

I am a sucker for cute little love stories where the main plot is how long is it going to take for the characters to admit they love each other, and while this book was just that it was also so much more. Dylan and Ziah are amazing characters and I loved watching interact with each other and their siblings.

Dizzy was my first experience with Nyrae Dawn and Jolene Perry, and after reading it I know it will not be my last. I always a little skeptical when reading books that have two authors because I have read books where the the authors couldn’t make their writing come together as one. Dawn and Perry did alternating chapters, Perry would write Ziah’s perspective and Dawn would write Dylan’s which worked out perfectly. Ziah has to be one of my favorite female characters, she was strong, determined, likeable, and relatable. And Dylan was funny, sweet, caring, stubborn, and strong.

What made this book such a hit in my eyes was the reasoning behind why Ziah and Dylan were so opposed to their sibling’s upcoming marriage. All Ziah has heard from her sister when they were younger was that school came first then love then marriage. Ziah heard it so much that she started to believe it. Getting married before graduating from college would be ridiculous; and when her boyfriend who she thought was the personification of the word safe turns out to be a giant d-bag, she believes it even more! Dylan’s only looking for a girl to spend the night with not his life. After watching their parents marriage fall apart they vowed to never get married, so imagine his surprise when his brother comes home asking him to be his best man. Dylan’s story was so easy to relate too, as a younger sibling my brother and I have vowed to do many things that I thought was permanent and he thought was only temporary. Dylan doesn’t want to end up like his father, broken because the love of his life didn’t love him.

I loved watching Dylan and Ziah fall in love! Dylan was so reluctant and scared always denying his feelings and Ziah was the same, she was scared to put her trust into somebody who had the power to break her heart. While this book is cute and funny and vaguely reminiscent of the Parent Trap its so much more. Throughout the story you get to watch these two characters grow and mature and its also a little heartbreaking. But this book is SO dang cute, and definitely worth the read!

“As much as I should keep my heart in my chest, part of it runs away with him. And maybe that means part of his might be here with me.”