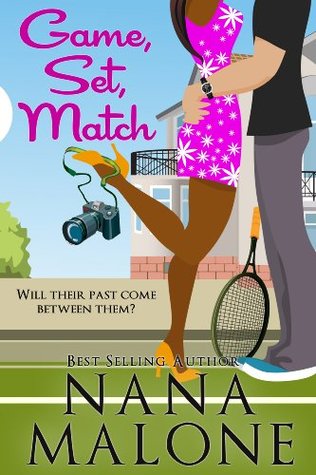 Off the court, tennis star Jason Cartwright’s playboy image is taking a public beating. On the court, he’s down forty-love. A knee injury is shutting down his game, and the paparazzi are splashing his love life on every magazine. A comeback is in order, but the makeover he needs to save his faltering career is in the hands of the woman he loved and left fifteen years ago.

While single-mom, Izzy Connors, sees people for who they really are through the lens of her camera, even without it, she knows Jason isn’t the star he appears to be. Although his charm and good looks haven’t dimmed since he broke her heart, all she sees is his wasted talent and playboy lifestyle.

Can Izzy put the past behind her and help Jason get his game, and his image, back on track? Or will the click of her camera shatter his world as well as his heart?

This book was at the top of my list this month because the only thing on my mind was tennis. I am a MAJOR fan of tennis, so when I wasn’t watching the Australian Open I was reading this book.

This book follows Izzy and Jason, old lovers who have fallen into each other’s lives 15 years after their failed romance. The characters of this book were so enjoyable to read about, they were funny, realistic, and they way they interacted together was amazing.

Game, Set, Match is filled with secondary characters that really make this book vibrant! My favorite character was Jess, she kept Izzy in check and basically made it possible for these stubborn main characters to get together. Nick is Izzy foster son, which I feel should have been mentioned in the synopsis since Nick and his story was a main aspect of the book. Actually the whole story was based on Nick and his biological mother Sabrina while the romance between Izzy and Jason was secondary.

Izzy Connors was hands down one of my favorite female character, she was amazing and irritating all at once. I loved the fact that she was a fighter, she fought for the things she believed in and most importantly she fought for Nick even when everybody was against her. My biggest problem with Izzy was her pride, her pride got her in trouble a lot. Her pride is also what kept her from Jason for so long, they would’ve been together a lot sooner if she just put her pride aside and accepted the fact that Jason wasn’t the same person he was before.

Jason Cartwright was an absolute sweetheart…for the most part. Jason was just as stubborn as Izzy, but he was such a sweetheart. You could really tell that he was truly sorry for what he did to Izzy, and that was the reason I loved him so much. The only time I didn’t like Jason was when he was being a jerk because he is REALLY mean. There were multiple occasions when I wanted was for Izzy to smack him, because he truly deserved it.

All in all I truly enjoyed this book, the ending was absolutely adorable I couldn’t help but stare the last page Aww-ing! I recommend this book for anyone who wants a fast paced, cute contemporary.