And finally we come to the last Literature Post of the cycle of Detective novels. This time is about Paranormal Detectives. This is the ninth post of this great cycle where I have tried to cover all sub-genres within the genre of detective novels. I hope you have liked it and if you decide to read a detective novel, that some of the options discussed would have been useful. Since always the first and most important goal of these posts is to stimulate the desire to read and the habit of reading. Now talking about this post, when I refer to Paranormal Detectives, it’s not about investigators visiting haunted places, no, this post focuses on detectives, whether private or police, possessing paranormal abilities and / or having some paranormal weapon, also where they must exercise deduction skills, collecting clues, etc … where cases may or may not, also having paranormal elements. That is, they are detective novels, in the same sense as are those I have mentioned before in the cycle, simply including paranormal elements in these examples. Some of the options that I will discuss were included in the post about Urban Fantasy, but many did not, and are completely new to the posts. And in case of some misunderstanding, this is far from the last Literature Post 😉 There are still many books to talk about!

The author Jim Butcher published in the year of 2000, the first novel entitled “Storm Front” and he introduced to the world, his character, Harry Dresden, a private detective, but what makes it different is that it is also a wizard, but unlike his father who was a magician in the normal traditional sense of someone who has a show at an auditorium with sleight of hand and escapism, Harry Dresden is a true wizard with magic powers that are usually associated with natural elements, forming will advanced control and power over them but you can also create tracking spells that are very useful in their work as a private detective. This is no secret, as even in the yellow pages his name appears on the list of private detectives under the classification of “wizard”. The Chicago Police Department has also consulted in different cases. The style of the stories is to combine magic with a clear typical detective style of “hard-boiled”.

This book series known as “The Dresden Files” was adapted into a TV series on Sci-Fi Channel in 2007, and although it only lasted one season, in the case of books, the series has been very popular, reaching 14 novels and 18 short stories published in various magazines and publications, where some of them have been compiled in a first volume of short stories, and the author promises that eventually all short stories will be collected in this same way.

Writer Steve Bein started in 2012 a book series titled “Fated Blades” where the main character is Mariko Oshiro, a Japanese young policewoman who manages to be promoted to the most prestigious elite unit in the Tokyo Police Department, but joining this team where all officers are men is not easy and unwelcomed finding a hostile environment there. Fate will lead her into the path of a sword forged in the times of Feudal Japan by a legendary blacksmith of Japanese steel known as Master Inazuma, wiich it is said that the swords he forged have magical abilities. This is a recent series but quickly gains audience mixed paranormal elements in the middle of the crude reality of the criminal environment, mainly related to narcotics, in contemporary times of the city of Tokyo, Japan.

The author Jes Battis started in 2008, the book series titled “Occult Special Investigator” where the main character is Tess Corday, which is an OSI police officer for the Vancouver’s Mystical Crime Lab. In a world where finding a crime scene with a dead girl vampire is not unusual, nor whether if it’s a necromancer, a witch or other paranormal beings, their deaths must be investigated like any other murder. 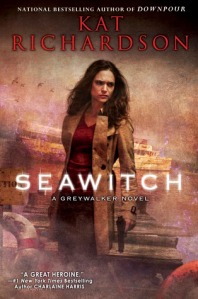 The writer Kat Richardson debuted in 2006 with her book series titled “Greywalker” where the main character, Harper Blaine was a completely normal private detective operating in the city of Seattle, Washington, until she clinically dies for 2 minutes and when she returned to life, discovers that she is now a “Greywalker” able to walk on the fine line between our reality and the one where horrific and dangerous creatures emerge at night. Now she can see things that others do not see. This gift (or curse) will cause their cases become bizarre and unusual with paranormal elements emerging in the most unexpected ways.

The author Darynda Jones began in 2011, her book series with the main character of Charlotte “Charley” Davidson, who is a part-time private detective and full-time “Grim Reaper”. This second task will demand her to convince dead people to go to the “light” but when those people have violently died, they ask to investigate their deaths and to find the culprits. Establishing an office in Albuquerque, New Mexico, where with the help of Cookie, part best friend, part receptionist, sometimes also she helps the police when her skills are key to solving cases.

From 2011 to date (2014) have been published 6 novels and 3 short stories, and has been announced the publication of the seventh book for October this year (2014).

The prolific writer Cheryl Kaye Tardif began in 2004, her book series titled “Divine” which introduces a Psychic Special Unit of the CFBI (Canadian Federal Bureau of Investigation), maintaining a low profile and few people know the existence of such unit. Their field leader is Agent Jasi McLellan, who is a “Pyro-Psychic”, able to touch ashes and grasp psychic vibrations of those who have caused a fire; the second member of the unit is Agent Ben Roberts, who is a Criminal Profiler and “Psychometric Empath”; and finally the third member is Agent Natassia Prushenko, a “Victim Empath”. Their missions demand them to travel to all parts of Canada.

Between 2004 and 2011 have been published two novels in the series. 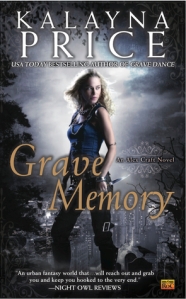 The author Kalayna Price, published in 2010, the book “Grave Witch”, and with that she began her book series “Alex Craft” which is a witch with the ability to speak with the dead. She has the profession of detective and also the Police, on the fictional city of “Nekros City”, consulting her when cases involve the use of black magic. She even talks on “first names basis” with Death, literally. Death is actually a good friend of Alex Craft and when he usually appears he wears jeans. No kidding!

From 2010 to date (2014) have already published three novels and a short story, it has announced the fourth book for March 2015 and a fifth book still awaiting a confirmed date to be published. 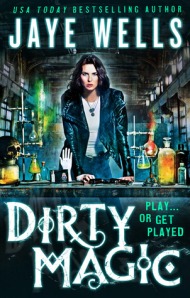 The popular author Jaye Wells that already she has the known book series “Sabina Kane” now began in January 2014, a new book series titled “The Prospero’s War”. The first novel “Dirty Magic” introduces the main character, Kate Prospero, a patrol cop that in one of her rounds she fires against a werewolf, but this act gets her in trouble with a mysterious law enforcement agency that deals with cases related to magic and the paranormal, since the werewolf was a “snitch” that that agency was using in a case on the trail of an illegal magic potion. Kate Prospero quickly tries to enter the agency believing that this can result in a promotion in her career.

The series published the first novel on January 2014, it has been announced the second book in August 2014, and so far, there is a third novel announced to be published on March 2015.

Diana Rowland is a writer of Urban Fantasy that has gone through a whole potpourri of professions in her life, bartender, blackjack dealer, uniformed cop, detective, forensic computer specialist, crime scene investigator and even a morgue assistant.

In 2009, she debuted with the book series titled “Kara Gillian”, who is a homicide detective in Beaulac, Lousianna. But she also has the power to “other-view” that lets her see paranormal things that others do not, and she is able to summon a demon. With the advantage of these extraordinary abilities, Kara faces unusual cases of serial killers.

From 2009 to date (2014) have been published six novels and has already announced the publication of a seventh book in 2015.

SEE YOU NEXT WEEK!

View all posts by malodious