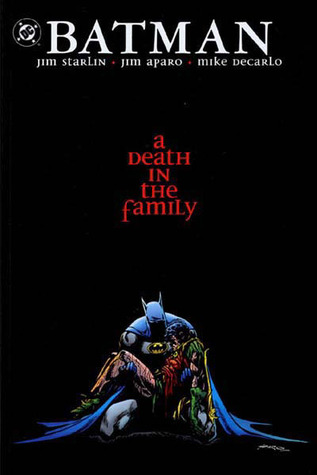 Batman: Death In the Family

Batman readers were allowed to vote on the outcome of the story and they decided that Robin should die! As the second person to assume the role of Batman’s sidekick, Jason Todd had a completely different personality than the original Robin. Rash and prone to ignore Batman’s instructions, Jason was always quick to act without regard to consequences. In this fatal instance, Robin ignores his mentor’s warnings when he attempts to take on the Joker by himself and pays the ultimate price. Driven by anger with Superman by his side, Batman seeks his vengeance as he looks to end the Joker’s threat forever.

First I have to start by saying this review has some spoilers in it.  This book is about Robin #2 Jason Todd, the spoilers aren’t  enough to ruin the whole entire story, but if you have no knowledge of Jason  than this will spoil you a little bit. If you want to learn more about Jason, then go on and read this.

I’ll admit it, I read Jason’s story backwards. I started with his New 52 title and got half way through before I decided I had to know his whole story. So I did some research and got the books I needed to know more about my  bloodthirsty vigilante, and the first book on that list was A Death in the Family.

The Death of the Family, takes off when Jason goes back to his old neighborhood and ends up learning some information that changes his life. Jason then sets out to learn more about  said information; at the same time Batman has his eyes set on the Joker and his next scheme.

This the book that ended Jason’s career as Robin, but ultimately started his role as the Red Hood – though we won’t see that until later titles. I liked Jason in this book, but by the time I started it I already loved him, so my opinion is biased. Jason was an interesting character, he as Batman says continuously throughout the book had “emotional baggage” he is dealing with the death of his parents and the toll of being Robin. Jason is rebellious and reckless, and doesn’t care or even think about what could happen to him. In later titles, Alfred says that Jason had a “mean streak”. Even though I loved him, in the 80s his run as Robin was not received well and it was the readers who decided to kill him off.

I don’t know who was the primary author for Jason’s run as Robin, but Jim Starlin wrote this and if he was the primary writer I’m not surprised the public didn’t take to Jason. The writing in this was pretty bad, I hated it. Though I loved Jason, it was easy to dislike him the way we was written. I even found Batman annoying, for such an epic hero he whines so much.  Thankfully though, after Jason’s demise the writing improves greatly. With Jason out of the picture we get into Bruce’s head and it so interesting. Bruce became reflective, and he was thinking about how he met Jason and what pushed him to make him Robin. We got a little  insight into Jason’s short time as Robin.

While the writing wasn’t the best, I still enjoyed the story. The first half I found myself really disliking it and finding the writing pretty mediocre. But within the beginning of the second half the story took off and the writing got significantly better. I found myself for the first time since starting this story actually enjoying it. We got great insight on Jason and his character, in the beginning he was this rebellious and reckless character, and then suddenly he wasn’t. I mean he was still reckless and rebellious but the decisions he made in the end was out of love and loyalty. It was those decisions that, will forever change the way I look at Jason.

What to read Next:

If you’re interested in reading more about Jason here are the books you should read next.

2. Batman: Under the Red Hood – this book is excellent, I loved it!