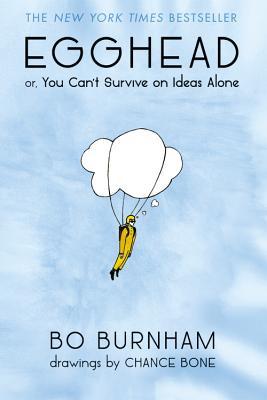 A strange and charming collection of hilariously absurd poetry, writing, and illustration from one of today’s most popular young comedians…

EGGHEAD: Or, You Can’t Survive on Ideas Alone

Bo Burnham was a precocious teenager living in his parents’ attic when he started posting material on YouTube. 100 million people viewed those videos, turning Bo into an online sensation with a huge and dedicated following. Bo taped his first of two Comedy Central specials four days after his 18th birthday, making him the youngest to do so in the channel’s history. Now Bo is a rising star in the comedy world, revered for his utterly original and intelligent voice. And, he can SIIIIIIIIING!

In EGGHEAD, Bo brings his brand of brainy, emotional comedy to the page in the form of off-kilter poems, thoughts, and more. Teaming up with his longtime friend, artist, and illustrator Chance Bone, Bo takes on everything from death to farts in this weird book that will make you think, laugh and think, “why did I just laugh?”

The first thing I want to say about this book is that it might not be for everybody. Some poems in this book are crude and inappropriate, some aren’t funny ( none of them might be funny, depending on who you are) some are complete nonsense and others are so beautiful and honest I had to stop for a minute just to fully absorb the words that I had just read. So Again this book might not be for everybody, but it was for me and I enjoyed every second of it.

I loved this book, it reminded me of my days in elementary school fight of the Where the Sidewalk Ends by Shel Silverstein. Bo Burnham’s writing and Chance Bone’s illustrations are so reminiscent of Silverstein that it’s crazy and made me so nostalgic.  As I said before some poems in this book are crude and nonsensical which threw me off a bit in the beginning because I would read one of those crude nonsensical poems then be thrown off by the utter beauty of the poem that rested on the next page. And honestly by the time I finished this book I found that I didn’t hate those poems, I loved them because its what made this book unique and so completely different from any collection of poetry that I have ever read. So even though I know that this book will not appeal to everybody I still recommend it to everyone .

In short: Egghead is hands down one of my favorite collection of poems. I enjoyed this book immensely. I found a lot of the poems hilarious, not all of them were funny some were confusing and weird, others were cute and heartwarming! It’s amazing, take the chance and read it whether you like poetry or not; and hopefully you won’t regret it.

Here are some of my favorites from the book: