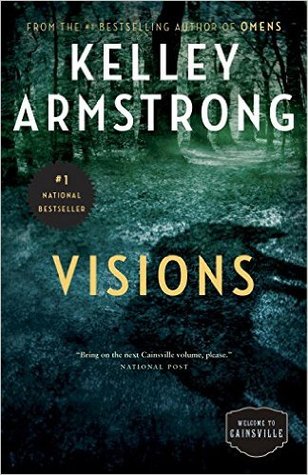 Visions is the sequel to Kelley Armstrong’s Omens which I have already reviewed so if you want to check that out you can click here. So because this is a sequel, I’m going to keep it short and vague to avoid spoilers, and because the points I’ve made on the first book, still apply to this one. (Also I didn’t include a summary to avoid spoilers, as well.)

First thing I want to talk about is the supernatural aspect. In the first book I expected it to be more prevalent and it wasn’t. It was here and there, and there was some clues but it wasn’t really explored or explained. So people didn’t like that, but personally I really enjoyed it. In Visions the paranormal aspect is explored and it’s really interesting the way Armstrong weaved it in. It’s not fully explored, you are left with a lot of questions but there are some clues in there that you can look up and things start to make more sense.

Next, there is romance in this book and by that I mean sex. A lot of it. Usually I get really annoyed when in just about every chapter there is a sex scene, but in this case I really didn’t mind. Also there might not be that many sex scenes but, just about every time they’re together it leads to sex. I think the reason I didn’t mind as much was because I’m a huge fan of Armstrong, I really like Olivia character, and I’m pretty damn smitten with the love interest. I love him, he’s pretty darn amazing, and I love the way he treats Olivia. He’s understanding, he’s not guarded, he adds a lot of warmth to the novel and the situations that Olivia is put in, and he’s super protective, but not in an overbearing way. Also I find it super adorable how smitten they are with each other.

Finally, I will talk about Gabriel Walsh. Gabriel is my baby, I love him to death. He is such a puppy and If I could just hug him and tell everything will be okay I would. One of the things I love about theses books is even though most of the story is from Olivia POV some chapters are from the point of view of other residents of Cainsville or the “villain” of the book, and sometimes Gabriel, and those chapters are my absolute favorite. I look forward to the different POV’s, they are always interesting and give a different perspective. Being able to read in Gabriel’s POV is the best, they give you a better understanding of his character and why he does things, the way he acts. they’re amazing and sometimes they make me cry.

I recommend this series to everyone, especially if you like paranormal and mystery!