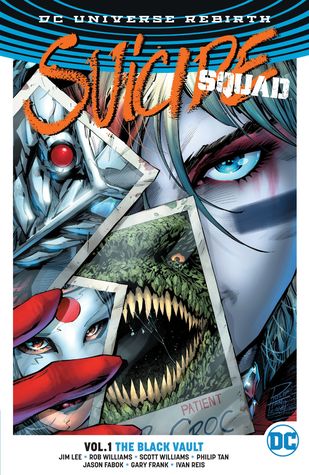 Received by publisher in exchange for a honest review.

The government has once again handpicked the worst of the worst for its Task Force X. Harley Quinn, Deadshot, Captain Boomerang, Katana and Killer Croc. All deadly criminals sent on the most dangerous missions possible by a governement that wants them killed. But their newest challenge? A teammate so powerful that even this group of murderers and thieves can’t control.

Behind the pencils of Jim Lee and Philip Tan, as well as the pen of writer Rob Williams comes Suicide Squad, Volume 1: The Black Vault!

I gotta say, this one surprised me. I honestly enjoyed this trade and will absolutely be continuing on with the run!

What I loved about this trade was that it was fun! I loved the way the team interacted with each other, there were a lot of quips and snide remarks which made it entertaining and relatable. It felt real, it felt like how a team would interact and I enjoyed it.

I’m a sucker for teams because I love the interaction and this trade had a lot. As a whole the team interaction is funny, definitely not serious, and protective. But, when the team splits up is when you sometimes see a different side of them which is intriguing and for me often pretty funny.

Side note #2: I feel like Rick is an exasperated dad dealing with is violent, murderous children. And this makes the whole trade even funnier to me.

On the squad this time around is Rick Flag, Katana, Deadshot, Captain Boomerang, Killer Croc, Enchantress, and Harley Quinn. I hope we get to see different characters as the run continues but I will also be happy to keep the team as is. I want to see Enchantress and Katana explored more, as they didn’t get much action in this trade.

I don’t really have much to say about the storyline. The whole trade focuses on the mission, and honestly it’s a little murky and i’m guessing it will be further explained in the next trade, considering how it ended. This trade focuses more on how the team works together, and how Task Force X operates as a whole.

My favorite part about the whole trade where the one shots at the end. Katana’s was my absolute favorite! Also, I really enjoyed the design of the characters especially Harley.

Long story short,
I liked it, it made me laugh, I ship Killer Croc/Enchantress, and I will continue on with the run.