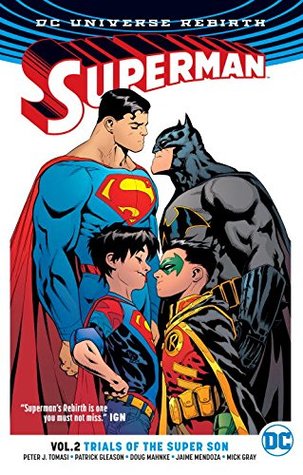 Superman and his super-son Jon are back in the second volume by best-selling author Peter J. Tomasi!

With Jon becoming more and more powerful by the day, Superman’s greatest foes are starting to take notice of the new super-kid on the block. When one of the most evil and ruthless of Superman’s rogues’ gallery comes for the Man of Steel’s son, Clark must decide just how far he’s willing to go to protect the ones he loves.
Superman and Jon Kent are transported to Dinosaur Island to find the last of the Losers! Then, after a quick trip to the county fair, Jon meets his match in Damian Wayne—and the Super Sons’ fathers soon put the two young heroes through their paces as a new crime-fighting team is forged!

This trade was a little different than the last one. Instead of having one story arc that was explored throughout the whole trade, this one had three. I will share my thoughts on each story arc, there will be a little spoilers but nothing that will ruin the trade or the story arcs.

The first arc was Dinosaur Island part 1&2. I thought this arc was really good and I can’t wait to see where the storyline goes. It left me with so many questions! It did a great job of exploring Jon and Clark’s relationship, and Jon ever developing powers, all while introducing a new plot line that I expect will show up in the coming trades. Honestly, these issues were so good that it could be its own series. Now, looking back I wish the story arc was further explored and fleshed out more, just because it was that good and exciting.

Now, after I read the first trade which I gave a 1-star rating, I was sure that I wasn’t going to be continuing on with this run. But, I saw the cover and knew I had to read it.

Truly, I only wanted to read this volume to see Damian beat up Jon.

Not that I have anything against Jon because he’s pretty freaking adorable but, Damian Wayne is my little demon baby and I love him!

The two issues in which Damian was featured were great! I enjoyed seeing Maya & Goliath again. Also, Maya calls Damian little brother and I die. Watching these two super sons work together was adorable, sweet, and oh so funny! I really can’t say much about this arc without spoiling anything, but these issues serve as a kind of backdoor pilot. And after reading this, I will definitely be picking Super Sons.

The last two issues in this trade felt a little out of place. Though Lois Lane continues to be pretty freaking amazing.

Frankenstein and his Bride are hunting for a fugitive. These last issues mainly focused on them, and their relationship. The ending for the last issue was rushed, one second they’re looking for the fugitive and the next she’s apprehended with little explanation. but the main focus really wasn’t on the fugitive it was the Frankensteins and, damn the Bride was ice cold! By the end, I wanted to punch her and hug Frankenstein.

One critique I have is there needs to be more dad jokes. Clark told only TWO dad jokes in this whole trade. I would love it if Batman told a dad joke, can imagine?

While I still stand behind the 1 star I have volume 1, I have to say this volume was pretty freaking adorable. I think I liked this volume much better because I knew what to expect. It has action but it’s mainly family-focused and filled with fluff, it’s sweet and entertaining.

If you’re new to comics and don’t know where to start, this run is a good starting point if you’re interested in Superman or fans of Smallville!