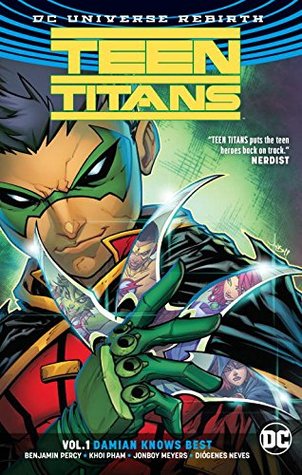 Received from publisher in exchange for an honest review.

As a part of DC Universe: Rebirth, the son of Batman, Damian Wayne, joins the Teen Titans!

The Teen Titans are further apart than ever before…until Damian Wayne recruits Starfire, Raven, Beast Boy and the new Kid Flash to join him in a fight against his own grandfather, Ra’s al Ghul! But true leadership is more than just calling the shots–is Robin really up to the task? Or will the Teen Titans dismiss this diminutive dictator?

The team will have to figure this out fast, as a great evil from Damian’s past is lurking around the corner, ready to strike at the team’s newest leader and destroy the new Teen Titans before they even begin!

My little demon baby went out and made some friends! *dies*

I really enjoyed this volume. It was filled with action and heart, and those two factors put together are always a win in my book. I really was looking forward to this one, just because it has Damian. He’s my demon baby and I love him. He’s also my second favorite Robin, Jason being my first. But also, who doesn’t have a soft spot for the teen titans?

I loved the beginning! Watching as Damian assembled his team was the simultaneously worrying and hilarious. Being the little demon he is, he didn’t just ask them to join the Teen Titans. That would’ve been too easy.

The relationship between Alfred and Damian. This relationship really made me realize how young and lonely Damian really is, and it was a tad heartbreaking. HE’S JUST A LITTLE BABY!

Damian making friends. It was a miserable experience for him. I loved it!

Starfire lowkey being the team mom.

Wally (my other baby) being the glue, and making connections with everybody on the team.

And finally, Damian putting Bruce in his place.

Why does every Damian storyline have to be about Ra’s al Ghul, his mother, or showing everybody he’s the best. It was fine the first time around, but I want a storyline that doesn’t involve his past. We already know what he wants for his future, what he wants to be, and I need a storyline that’s going to bring us closer to that. That shows him growing without being hampered and constantly plagued by his past. We already have that with just about every member of the Bat-Family.

That is really the only thing I didn’t like. It’s annoying to be getting the same storyline in different variations. Damian’s overall character feels stagnant. He can’t grow beyond being the Demon. In this volume, there was quite a bit of growth and I loved it. I want it to continue, but with these same played out storylines, it ain’t gonna happen.

Now, in saying that I’m by no means discounting Percy’s storyline or writing because it was good. I like his depiction of Damian’s character and the rest of the team. His writing was intriguing and fast-paced, and as previously stated filled with action and heart. My critique comes from wanting to see more of Damian’s character in a way that doesn’t involve his past. I also blame Son of Superman, because it gave me all I wanted in two issues.

As this run continues I hope to see more growth from all characters and some interesting storylines.