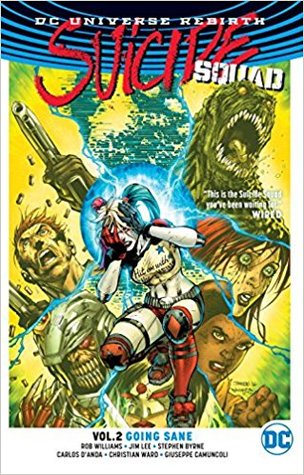 Received from publisher in exchange for an honest review

The government has once again handpicked the worst of the worst for its Task Force X: Harley Quinn, Deadshot, Captain Boomerang, Katana and Killer Croc. Following their clash with the Justice League, the team faces a new challenge as the dark energy of the Black Vault starts to drive the prisoners of Belle Reve insane–except for Harley Quinn, who seems to be more rational and level-headed than…well, ever.

Why are these volumes so short? I mean I really do appreciate the character one shots at the end, but the volume is really only three issues and some extras.

I have to say this volume lost a lot of its charm. The storyline would’ve worked much better if it were longer. It felt rushed, and it wasn’t exciting. It was very based, and with the storyline it was understandable but these characters don’t shine as much when they are on their own.

Now, Amanda “The Wall” Waller was lowkey pretty amazing In this. I was actually worried for her, like really worried! I liked her in this volume because she stood out more, she felt more like a person instead of a Warden, if that makes sense. This issue also brought up some questions about her past and the things she’s been through some I’m looking forward to seeing her character more fleshed out.

Killer Croc is amazing, I want to give him a hug, I love him.

June Moone is a lowkey badass.

Croc/June: Rob Williams if you mess this up for me…

Also, I’m a little worried about Hack. I need her to get a better arc because what she has now ain’t working and I feel like she’s going to turn into the Joker’s daughter and that ain’t cute.

Katana? Like, don’t sleep on her. She needs more action, more involvement, more control. Let her run the squad for a bit. Do something with her, and make it good!

Justice League vs. Suicide Squad? Looks like it might be good but, I’m trying not to get my hopes up.