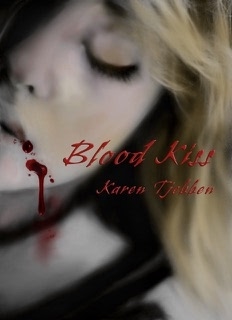 Alisha Woods knew she was in trouble. The situation was progressing. The harmless flirtation had long past intriguing and now bordered on terrifying. She had to take action, go on the offensive against her stalker. As she opened the door of Young Guns, she promised herself that she’d be ready when he came for her. She would survive.
Mike Lewis lived each day knowing that life could evaporate in a moment. Ghosts followed him, haunting his soul. He craved redemption, a chance to right the wrongs of his past. And when Alisha walked in, he recognized his chance at redemption. He would save her.
After everything Mike had done to prepare her, she thought she was ready. But as the blood spilled from her lips, Alisha’s mind raced for what she could have done differently…
She should have listened to Mike.

Mike waited for her to say more. He was a patient man. He knew enough about human nature to know that if he didn’t say anything she’d eventually fill in the silence. He tried to look relaxed by resting his arms on the table and interlocking his fingers, but inside a storm was brewing.

“He knows where I live,” she said soberly. She looked into Mike’s eyes for strength. Even though he was intimidating, she saw goodness in him. She hoped that he could be more than a shooting instructor.

Mike didn’t like the man knowing where she lived, but this information didn’t surprise him. If the guy had been stalking her for a while, he knew all sorts of things about her that would make her skin crawl. He probably even tracked her monthly cycle.

She sucked in a deep breath and began, “I was going out with some friends, but I needed to stop by my house to drop something off. I didn’t bother parking in the garage,” she said with a shrug of her shoulder. “I just pulled into the driveway and ran into the house. I didn’t even lock the car.” She tilted her head and rubbed her fingers over her forehead, as if massaging herself would delete the memory of that night. “I was just going to be inside for a minute.” She sat straighter and looked Mike in the eyes. She found strength in him even though he sat silently. “But a friend called. The plans had changed, and she wanted to update me,” Alisha added casually. She scoffed and gave him a sad smile. “When I went back out to the car, a stuffed animal lay on my seat.”

Mike read the tension in her face as her muscles tightened around her eyes and mouth. She swallowed more frequently and her breathing had increased as she relayed the information. He smiled, trying to silently encourage her, but what she told him made his heart pound. “He was watching you,” Mike said calmly. He didn’t want to scare her any more than she already was.

“Yeah,” she nodded. “He must have seen me get out of my car and run inside.” She shook her head slowly in disbelief. “He was there. He was probably looking at me at that very moment.” She shivered and looked through the window into the darkness of night. “I didn’t see him. I didn’t see anyone that I could even question. None of my neighbors were outside.” She paused for a moment and then began again, “I don’t think he followed me. I think he was waiting for me.”

Mike nodded slowly. “He was there.” Mike knew how to hide. He could disappear in a jungle, desert, or city. Disappearing was one of his strengths, but he didn’t like hearing that the stalker could hide too. Most people would do something stupid and give themselves away: the shaking of leaves or the snapping of branches, wearing the wrong clothes for camouflage. There were so many things to consider when trying to disappear.

and two hamsters. When her girls left for kindergarten, Karen discovered that she needed to fill her days with something, and that was the beginning of her new career in writing. She loves to create worlds filled with unique characters that she hopes will delight and raise goose bumps on her readers. In her free time, she enjoys traveling with her husband and seeing the world through her daughters’ eyes.

One person will receive a $5 Amazon Gift Card.

One thought on “Blog Tour: Blood Kiss by Karen Tjebben”