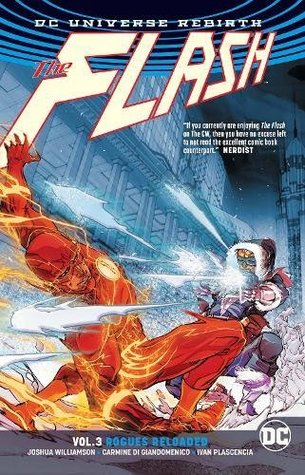 The Flash’s old foes, the Rogues, have abandoned Central City, pulled off that big score they’ve been after for years and are living it up in a beachside mansion. The only problem? They ripped off the wrong people–and now, some truly evil people are out for revenge. If the Rogues are going to have any chance of surviving, they’ll need the help of their least favorite person alive: the Flash.
From up-and-coming writer Joshua Williamson (Illuminati, Red Skull) and illustrator Carmine Di Giandomenico comes The Flash, Volume 3: Rogues Reloaded!

Right off the bat, this has been my favorite volume thus far. I really enjoyed watching the rogues give ol’ boy Barry a run for his money, and I really loved that he was in full investigative mode and I wasn’t subjected to panels and panels dedicated to his feelings.
While I love Barry, listening to his problems it isn’t fun. Especially since they are pretty easily solved, If he was just HONEST, but whatever.
What made this volume so interesting was that it focuses less on Barry and more on the people who occupy his life namely, Wally & Iris. I adored them both in this volume, Iris herself was also in full Investigative mode and it was cool to be in her head if only for a bit, and she was pretty bad*ss!
But It was the sweet summer child Wallace West that stole my heart and in my eyes the show. His mission was so sad, and I was so hoping that he would get the answers he so desperately wanted/needed. His moment with Barry brought tears to my eyes, god I’m so happy that he is getting more development!!
All in all, this was a pretty good installation, if I’m being honest it’s more of a 3 overall, but it had some amazing panels and a lot of development so I had to give it a 4.
Side notes:
I want Wally to stay mad at Barry.
Bartholomew Allen Is very annoying
I want more bad*ss Iris West
THE ROGUES NEEED THEIR OWN SERIES
Captain Cold will be back, and I’m excited to see how it turns out
I wanted the rogues to get a HEA, but Bartholomew Allen RUINED IT.
Also, I’m going to need Barry to stop saying he’s the Fastest Man Alive until he races redhead Wally.
Iris is definitely going to kick Barry’s butt, and (young) Wally is going to
help. On second thought maybe both Wally’s will help.