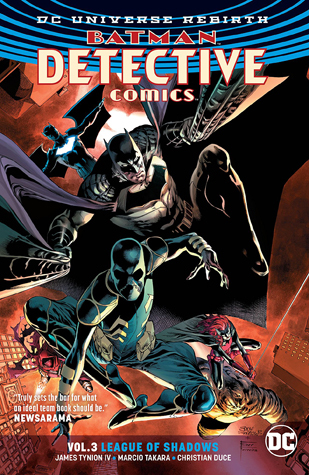 Batwoman, an accomplished crime-fighter who’s overcome the darkest of betrayals. Clayface, a reformed villain whose potential is eclipsed only by his astonishing powers. New heroes like Azrael, an avenging angel, and Batwing, whose incredible armor makes him a true dark knight. Led by the Batman himself, this team of guardians stands ready to protect Gotham City.

But the secrets of the team’s most mysterious member, Cassandra Cain, are about to come to light. And that light will cast a shadow darker than anything they’ve ever seen before.

They thought the League of Shadows was just a rumor—a secret society of nihilistic killers often whispered about but never seen. But now the League is here, in Gotham. They’re destroying Batman’s team one by one. And their sinister leader, Lady Shiva, has come to reclaim her daughter—or destroy her.

Can even Batman’s arch-enemy Ra’s al Ghul and his League of Assassins stop the onslaught? Or have the Shadows come to stay?

Find out in BATMAN: DETECTIVE COMICS VOL. 3: LEAGUE OF SHADOWS.

This was the best one yet, I have no idea what is coming but I’m excited.

The fact that this volume focused on my favorite girl, Cassandra I was hooked from the first page. This volume had some of the most beautiful pages in terms of writing and artwork.

The team feels like an actual team now, they work with each other and interact with fondness, it’s amazing to see how they have evolved from the first volume.

The storyline was pretty amazing, the antagonists in this volume were perfect and did a great job at setting the stage for what is to come and I’m hyped!

Like can you guys tell I loved this volume??

I really liked that Stephanie wasn’t in this volume

Clayface is such a sweetheart!

All I want is for Cass to be happy and loved.

There is going to be magic! Which is great because I love just about every magic user in DC

Basil Karlo deserves love, rainbows, and sunshine. He deserves a chance, and infinite hugs and snuggles.

Bruce Wayne is a bad dad. But ya’ll should know that.