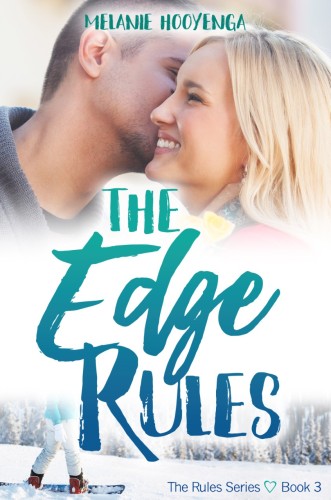 THE EDGE RULES BY MELANIE HOOYENGA

Being a bully isn’t all it’s cracked up to be.

Sixteen-year old Brianna had everything she wanted: money to ski all over the world, underlings to do her bidding, and parents who gave her every freedom—as long as she played by their rules. But when she’s busted shoplifting and assigned to the Chain Gang, she ditches her shallow ways and realizes being herself is easier than manipulating people.

Forced to partner with kids she’d never dream of befriending, including Xavier, a boy who makes her pulse go into hyperdrive, Brianna vows to be a better person. Breaking Old Brianna’s habits isn’t easy, but her infatuation with Xavier—someone her parents would never approve of—motivates her to keep trying.

Even when he convinces her to trade her swanky skis for a beat-up snowboard.

Brianna lets go of her need to control everything and finally starts to feel free—until her past threatens to jeopardize her first real chance at love. She discovers balancing on the edge is as challenging in life as it is in snowboarding, and when a new friend is in trouble, Brianna must decide between the superficial things that used to be her world and putting her friend’s safety before herself.

My road to publication is paved with ten years of writing and six years of publishing. I sought representation for my first two novels, but as is the case with a lot of writers, the first novels you write aren’t usually the ones that get published. It wasn’t until I wrote FLICKER, my first YA novel, that I found my voice. Despite the fact that I’m in my 40s, I’m most comfortable writing teenagers.

I queried FLICKER and had several agents request the full manuscript—which is a huge step in the process—but ultimately they all passed. I had always sworn that I would never self-publish, but by 2012 the stigma was starting to change and more authors were choosing self-publishing, not looking at it as a last resort. Because I’m a graphic designer I was able to design the cover and handle a lot of the marketing pieces that most authors have to outsource, so the cost has been minimal.

I published FLICKER at the end of 2012 and hadn’t intended for it to be a trilogy, but suddenly I had ideas for two more books, and FRACTURE and FADED were born. (If only the process were as easy as I make that sound!) I continued self-publishing the rest of the trilogy and with each book the process has gotten easier.

With THE SLOPE RULES, I also sought representation but ultimately chose to go indie again. I had good feedback from agents, including two who told me they were already representing YA ski books, so I knew I was on trend and could do well on my own. Self-publishing is challenging because you’re responsible for everything, but it’s also very rewarding to know everything I’ve accomplished is because of my efforts.

Like with the Flicker series, I knew I would continue to self-publish the rest of The Rules Series. I wrote both THE TRAIL RULES and THE EDGE RULES in 2017, and have now published them both in 2018. I like to challenge myself with each book, and writing two books in a year was my latest challenge (and now I’m exhausted, haha). After publishing six books, I feel like I’ve got a pretty good handle on how to do this, but I’m always looking to improve and reach more people.

My next book will be a YA psychological suspense, so quite a bit different from my current work, and I plan to seek representation for that again. I think the idea is more marketable and on-trend with what’s out there, so now I just need to hurry up and write the book!

teenager and finds she still relates best to that age group. She has lived in Washington DC, Chicago, and Mexico, but has finally settled down in her home state of Michigan. When not at her day job as a Communications Director at a nonprofit, you can find Melanie attempting to wrangle her Miniature Schnauzer Owen and playing every sport imaginable with her husband Jeremy.

Physical Copies of the series (US). Digital copies for international winners.