From author Elle Keating comes FEELS LIKE FALLING, the next installment in her Dangerous Love series. Peyton Matthews doesn’t want anyone to find the chinks in her armor, and Luke McGinnis fights hard to keep his ugly past buried. While they are drawn to each other, chemistry is not what’s bringing them together. Fans of UGLY LOVE by Coleen Hoover, Sylvia Day, and EASY by Tammara Webber will devour this dark and emotional romance.

Luke McGinnis is the responsible, quiet older brother. The loving son who enjoys working side-by-side with his father at the winery they co-own. At twenty-nine years old, Luke is a success story, the rags-to-riches kind. That’s what people see. Not the ugly past he fights to keep buried… a past that keeps him from really living.

Peyton Matthews is a household name. As a model, her face has been on the covers of countless magazines and she now has more money than she will ever know what to do with. But that smile she flashes for the photographers and the media is just an illusion. That pretty package everyone envies has been her armor, her protection, and she doesn’t want anyone to find a chink in it… especially not the winery owner who looks at her like he knows the dark secrets she keeps.

Listen to the FEELS LIKE FALLING playlist on Spotify now! https://spoti.fi/2ND6ypi

I am back with the McGinnis boys. This is only the second book that I have read in this series but I am seriously contemplating picking up the others!

This book can definitely be read as a stand alone. We do get glimpses of the other brothers and what is going on with them but it does not take away from the story at all and the writer does a superb job at explaining everything.

Luke and Peyton’s story was heartbreaking! I was shedding tears on many chapters throughout. I loved Luke for his quiet and loner nature. He was not looking for a relationship and had abuse issues in his past which makes him struggle with sex now. I also adored Peyton. She was strong and hoping for love but not really looking. I really loved her for her adoration and protection of her sister. She would do anything for her.

When the two get together, it is pretty powerful. They both hold the same skeletons in their closet so they kind of understand each other better than most.

I cannot wait to read the next story in this series which I am hoping is Gabe’s. Until then, you need to pick this one up. Have the tissues ready!

Peyton looked back at the bar, but Luke was nowhere to be found. Pissed, she continued her trek to the bathrooms anyway and was just about to enter the door marked MNA when someone grabbed her hand and pulled her down a hallway and into some back room which housed a pay phone and a rack full of coats. Like the rest of the tavern, the lighting wasn’t great, but she was able to focus on the man who still gripped her hand and stared at her like he was either going to yell at her or take her against the wall in the most primal of ways.

“What are you doing here?” she asked.

“Who is he?” Luke asked through gritted teeth.

It pissed her off that he completely ignored her question and asked her one instead, one that truly left her perplexed. “Who are you talking about?”

“The man who felt it was okay to touch you here.” He released her hand, but she instantly felt his fingertips at the small of her back.

The heat of his touch made her anger fade, at least for the time being and she said, “He’s a friend of Walt’s.”

“Are you leaving with him?” His eyes darkened and he drew closer. His hand fell away from the small of her back, which thankfully broke the trance her body seemed to be under and her fury was reignited.

Who the hell did he think he was? She didn’t owe him anything. Not even responses to questions that made her hot and furious at the same time.

“Did you follow me here?” she asked. Her voice shook a little, but it was better than submitting to his questions.

“Yes. Now, are you going home with him?”

“Do you have any idea how messed up that is? That you fucking followed me…again?”

His jaw clenched and he looked away. Peyton was prepared to continue, to lay into him and tell him that he was a stalker and could go to hell, but then he glanced back at her and she saw the shame in his eyes. “Yeah…it is fucked up. I’m…fucked up,” he said.

She wasn’t even going to try to pretend that his words didn’t shock her. He knew what he was doing wasn’t normal. That he wasn’t normal. Luke roughly raked a hand through his hair as he paced the small coatroom. He reminded her of a caged animal, one that was anxious and willing to chew through the bars to get free. Shame, worry, pain, fear, confusion. He seemed consumed by each emotion all at once and all she could do was watch him suffer. What happened to him? Why did he look so…broken?

Before she could ask, Luke shook his head, told her he was sorry and left.

Enter to win one of three Dangerous Love Book Bundles!

(includes, Thrill of the Chase, Cut to the Chase, Wanting More, & Back to the Start)

What more from Elle Keating? Grab the rest of the Dangerous Love books!

THRILL OF THE CHASE

CUT TO THE CHASE

BACK TO THE START

Elle Keating is the author of romance novels with sexy heroes and fierce females. Her 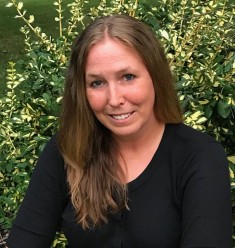 When Elle isn’t torturing her heroes and heroines (don’t worry, there’s always a happily ever after), she is a public school administrator and enjoys spending time with her husband and 3 children in New Jersey. For more on Elle and her books, visit ellekeating.com.