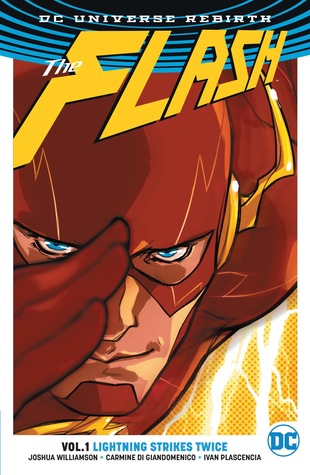 Received from publisher in exchange of an honest review.

A part of DC Universe: Rebirth!

A new storm brews over Central City and disproves the old adage about lightning never, well…you know. Just as Barry begins to feel overwhelmed fighting crime, a new speedster debuts–but just where did this amazing new friend come from? Spinning directly out of the epic events of DC Universe: Rebirth, the Fastest Man Alive finds himself at the center of a DC Universe at a crossroads–and reeling from the reemergence of his protegee, Wally West!

It was pretty good, I liked it.

It was a great trade for new readers, I was a little confused about the two Wally West’s because I didn’t read the previous run, so I don’t know young Wally’s origin. But other than that it was fine, and I really think fans of the show will enjoy this, it feels pretty similar.

The storyline was interesting, and enjoyable. There was a lot of moving parts, that came together in the end and I really liked that.

The twist though wasn’t surprising, like at all. But that didn’t lessen the quality of the story, at least for me. It was entertaining to watch Barry deal with the surprise. I also like watching Barry deal and figure things as a member of law enforcement.

Iris was pretty badass in this trade, definitely not a damsel. Her relationship with young Wally West was my favorite. They love each other so much, and Wally looks up to her and its endearing. Meena & Wally were sweet too. This trade focuses a lot on personal relationships.

I always kind of think of Barry as a Boy Scout. He’s good and sweet, and carries the weight of the world on his shoulders. He want to do everything, and save everybody and then beats himself up when he can’t. This in the beginning of the trade was endearing, by the end I was a bit annoyed. Also the repetition in this book drove me insane. The word speed appears at least a 200 hundred times in this trade, and I got tired of reading “My names Barry Allen, and I’m the fastest man alive”.

Overall it was a good trade, with an interesting plot, and great artwork. Perfect for new readers & fans of the show.

One thought on “Review: The Flash, Volume 1: Lightning Strikes Twice”