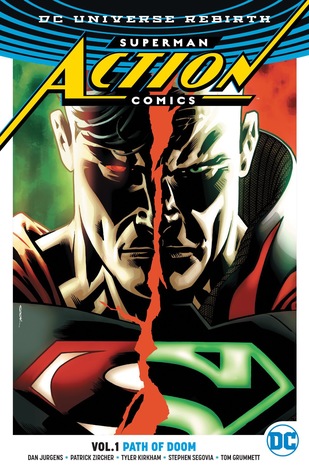 Superman: Action Comics, Volume 1: Path of Doom is here, as a part of DC Comics: Rebirth!

Superman returns to Metropolis just in time to meet the city of tomorrow’s newest protector: Lex Luthor. But it’s not long before these dueling titans meet someone unexpected — the new Clark Kent! The two arch-enemies must put aside their differences and face the common threat of Doomsday, as Jimmy Olsen and the Planet staff try to uncover the truth: who is the man claiming to be Clark Kent?

Writer Dan Jurgens (The Death of Superman) returns to the Man of Steel along with illustrators Tyler Kirkham (Deathstroke) and Patrick Zircher (Green Arrow) for the next great Superman chapter in Superman: Action Comics, Volume 1: Path of Doom!

I didn’t hate it but, I sure as hell didn’t like it either.

The plot was okay, a tad annoying, but not bad. I have to say, though son of superman wasn’t my cup of tea it was heaps better than this one. I would recommend just reading son of superman instead of this trade honestly. In Son of Superman the plot was forgettable but it was action packed, with moments of great interaction between the Kent family. With this one there really isn’t a plot other then Superman fighting, there are many points in the plot that of explored would have made this trade much better, but the author chose not to explore them and instead focus on a fight that spanned the entire trade. A fight that I’ve read and seen before, so I wasn’t fond of that plot point one bit.

The plot was pretty bland though there are a few things that stand out. The artwork wasn’t my favorite but I felt it worked well with story, though Wonder Woman’s design irked me a bit. Lois didn’t impress me in this one though, in son of superman she was pretty badass

I have a few questions:
SuperLex?
Weird dude in green hood, whatcha doing? Also, who are you?
Human Clark Kent, wth?